In a small Scottish university town, what links a spate of horrible murders, a targeted bomb explosion and a lecturer's disappearance? Is a terror group involved? If so, who is pulling the strings? And what does something that happened over forty years ago have to do with it?

Having recently returned to Castletown in the hope of winning back his estranged wife, DCI Jim Carruthers finds himself up to his eyes in the investigation. Struggling with a very different personal problem, DS Andrea Fletcher assists Jim in the hunt for the murderous perpetrators. To prevent further violence they must find the answers quickly. But will Jim's old adversary, terror expert McGhee, be a help or a hindrance?

'Robbing the Dead' is the debut novel of Edinburgh based Crime Writer, Tana Collins.

It is the start of a brand new police procedural series set in the East Neuk of Fife.
Published in February 2017 it became an Amazon No 1 bestseller for Scottish Crime Fiction.

Find it on Amazon. 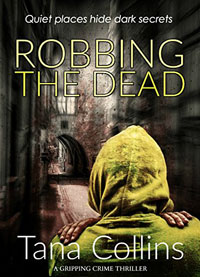