Players: A Game of Grit and Glory

Dive into the world of polo, seen through the eyes of Victoria Blake a – professional polo player trying to prove she can compete with the best men in the sport.

Players follows Victoria’s rag-tag team through triumph and heartbreak on the way to England’s prestigious Gold Cup. From the rolling green hills of England to the sun-kissed Pampas of Argentina to the glamorous fields of California, Players explores what it means to be a polo player – a local everywhere and a resident nowhere; always a traveler yet always at home.

This book follows Victoria’s team: Donald Davies, the young Englishman she meets in Argentina who becomes her closest ally; Charles McKinnon, the American billionaire who only breaks out of his corporate shell with his teammates; and Scott Taylor, the best player in America, who could never hold down a team due to his fiery temper. Meanwhile, Victoria’s best friend, Debbie Ravenscroft, is also trying to be at the top of her game as a lawyer and Olympic show jumper.

All of the characters share a thirst for greatness, along with a great love for their horses. 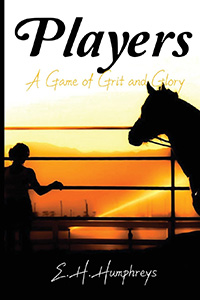