The emergence of post-hybrid identities: a comparative analysis of national identity formations in Germany’s hip-hop culture

German hip-hop culture is best known for its rap music and rappers’ portrayal of their life in Germany’s urban centres. Few studies have looked at German hip-hop’s other main art forms, such as graffiti art, dance and music, in conjunction with rap, or considered their joint contribution to the creation and development of German popular culture and contemporary identity.

This book breaks new ground by offering a comparative analysis of rappers, DJs, dancers, graffiti artists and their practices in the German cities of Hamburg and Oldenburg. The book reveals a fascinating variety of individual narratives on what it means to be German and to understand how German identities are managed and expressed through hip-hop’s different tools and art forms.

It illustrates complex and perhaps even contradictory views of this ever-changing dynamic and the relationship of national belonging, and proposes a new form of identity – the post-hybrid; contributing to the ongoing debate on cultural belonging and integration in Germany. 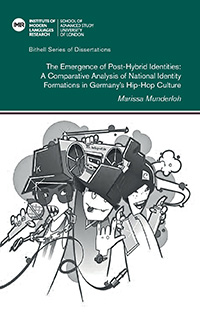