A Shadowing of Angels

"Sam knew that this was what she had trained for; thousands of rounds of live training ammunition, SAS and DHU instructors, and countless repetitions of likely hostile encounters known as 'situation awareness training', just clicked in..."

A Shadowing of Angels unfolds in the murky and dangerous world of covert intelligence collection and the 'Circuit'; the name given to London-based private military companies. Set in contemporary times, this adrenaline-filled novel highlights the Western world's struggle against the Islamic State, both in the West and in Iraq.

Samantha Holloway, a highly trained and effective Intelligence Corps and Special Forces Captain, suffers a serious setback when an agent handling operation in Helmand Province, Afghanistan, goes drastically wrong with life and career changing implications for Sam. People died and Sam paid; she therefore finds herself a team leader on a 'Circuit' mission. An American hostage has been snatched by ISIS and she must now lead her team of military contractors in a daring rescue attempt that will push her abilities to the limit. In their multicontinental search, spanning from London through to Iraqi Kurdistan, her team finally reaches into the 'heart of darkness' - the Iraqi town of Mosul and the areas of Iraq currently controlled by Daesh... 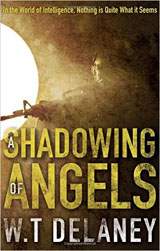