Three False Convictions, Many Lessons - The Psychopathology of Unjust Prosecutions

This book, written by two non-lawyers, examines the biology of injustice, and draws many lessons for judicial reform.

It is recognised that even in supposedly civilised countries, there is an epidemic of unjust, even malicious, prosecutions and convictions, and this book examines why through the prism of normal and abnormal human psychology. Around 4% of the population are born with a defect in the amygdala, (a paired nerve centre lying at the core of the brain's empathy system), and this predisposes them to lifelong Constitutional Negative Empathy (CNE). They never see in the distress of another an image of their own distress, are not averse to harming others, and never socialize normally. They engage in instrumental (targeted) aggression, and the worst become criminal psychopaths; CNEs are also found in all professions, and unchecked, over time create systems in their own image. The authors argue that confrontational justice systems are themselves intrinsically psychopathic, with the prosecution a natural haven for the least empathic lawyers including CNEs.

In horrific crimes, pressure to find a perpetrator is a powerful driving force for what, in the event of a conviction, becomes the 'legal truth'. Since criminal trials are usually held before a jury, many other aspects of collective psychopathology are also relevant to false convictions. These include; emotional imprinting, confirmation bias, the prosecutors fallacy, schadenfreude, victimisation, false confessions, false memories, false witnesses, false evidence and abuse of the press and now the internet.

In this book three cases in three supposedly civilised countries are analysed. The authors, fought independently for justice for Amanda Knox and Raffaele Sollecito, a young couple falsely implicated in the murder in November 2007 of Amanda's flatmate Meredith Kercher. This case exposes many of the weaknesses in Italian justice, with its love of dietrologia (viz, the simplest solution is too obvious), rather than Occam's razor (viz, the simplest explanation for the facts is usually correct).

They also present an alarming analysis to suggest neglect or destruction of crucial evidence pointing to the third accused man, Rudy Guede, as lone perpetrator. In the English case, Stefan Kiszko, who was wrongfully convicted in 1976 of the murder of 11 year old Lesley Molseed, for which he served 16 years, was David Anderson's patient. The case exposed many of the weaknesses of the English system, and the importance of preserving evidence even after a conviction. The real killer, Ronald Castree, was finally tried and convicted after DNA profiling of sperm imprints from Lesley's clothing 30 years later.

Darlie Routier, from Rowlett, Texas, now aged 46, has been on Death Row for 20 years for the murder of her two sons, in an attack during which she herself was stabbed in the neck and nearly died. The authors suggest that the real murderer was America's most prolific and lifelong serial killer, Edward Wayne Edwards, a highly intelligent psychopath who killed for recognition, regularly planted evidence and then exploited the justice system to trap and convict the innocent. 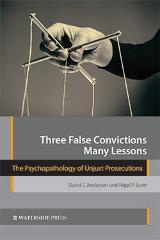