I Sold These Poems, Now I Want Them Back

Part wandering minstrel, part skilled artisan, street-merchant Brian Sonia-Wallace offers an exceptional artistic service—he creates poems to order. He asks you a few simple questions—who the poem is for, and what its subject should be—and then bashes away at his portable manual typewriter.

Ten minutes or so later, you hold in your hand a one-of-a-kind, uniquely crafted poem on a small, oblong-shaped slip of paper. It’s an indescribably special gift that he shares with you. The poem exists only when it’s in your possession. Brian’s book of poetry, I Sold These Poems, Now I Want Them Back, presents a carefully chosen selection of some of those “rent” poems he sold or gave away; the ones he made photographic copies of before they disappeared from his sight.
Bio: Brian Sonia-Wallace began busking poetry on the street full-time in September, 2014. Since then, he has written for tech companies and governments, toured nationally and internationally, and been nominated for a 2015 Doris Duke Impact Award. Brian is a Partner at the Melrose Poetry Bureau and lives in Los Angeles. 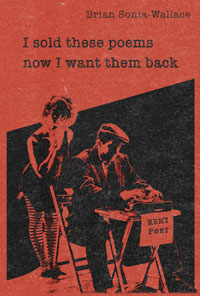