Wacky - The Diary of a Ship's Cat - a true story

This is my story. It is the true story, touched with a little magic, of the seafaring exploits of a Greek kitten. Serendipitously pulled out of the waves off the Greek island of Rhodes near the spot once occupied by the left foot of the statue of Helios the Sun God, which had straddled the entrance to Rhodes harbour.

I was a bedraggled, flea-ridden, half-drowned scrap of fur. I was fated not to perish, however, but to be lovingly nursed back to health by Zanthoula (which means small blonde female human bean), who became my Pet.
No one could then know that I was both classically educated and of high intelligence. Or could guess that I would grow up to be a strong and feisty professional Ship's Cat, destined to play a star part in the odyssey of small sailing yacht, S/Y Cappelle, in her voyage from the Aegean Islands to the Scottish Hebrides. My voyage brought me to attention of the National Cat Club of Great Britain, who awarded me a Champion of Champions rosette for my love of adventure and JUST FOR BEING ME.
Circumstances also led me to socialise harmoniously with celebrities. And to an encounter with royalty. This is the truth. Every paw-written word of it. I am amazing. So is my diary. 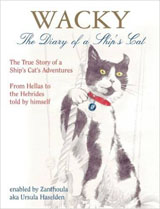