Turning way is a collection of poems many of which were first published in the well known British poetry magazines Acumen, Agenda and The London Magazine. The collection includes and greatly expands upon the author's 2007 pamphlet of the same name. I have included a reading of my poem, The Tree. This is adjacent to the words of the poem itself.

Those interested in poetry as a spoken craft, and in the tone and accent of the poet, might find this of interest. Feedback is most welcome: simply email the author at editor@negativeentropy.net.
This second edition adds several more published poems, and a reading of my poem, The Tree, to be published in Acumen 85, May 2016. “Turning Away is clearly a Renaissance man’s pamphlet. It’s thirty-two pages embrace at least six paintings, four great works of literature, quantum physics, theology, any of several species of eucalyptus and a network of Australian caves.
I took a curious pleasure in the meticulous references, which are not even daunted by poetry in mid-flow ...” ( Chris Beaton, Sphinx 8, 2008 ). Keith McFarlane is Scots. He grew up in Dunblane, Perthshire, and holds a doctorate in physics. His interests, in addition to poetry, include the nuclear-power and petrochemical safety, democracy and the constitution, contemporary art and emerging artists, particularly in Africa. He lives & works in Amsterdam.
Garry Duncan is Australian. He is well known as a painter and graphic artist. He is also an ecological activist, working to protect and restore the Mallee forests, the river-land and wetland ecologies of Victoria and South Australia. iBookStore ( FREE TO DOWNLOAD ): https://itunes.apple.com/us/book/id599573187 . 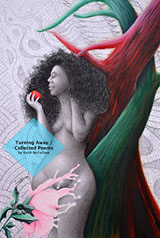