On the fiftieth anniversary of his death, C.S. Lewis was memorialized in Poets’ Corner, Westminster Abbey. Oxford and Cambridge Universities, where Lewis taught, also held commemorations. This volume gathers together addresses from those events. Rowan Williams and Alister McGrath assess Lewis’s legacy in theology.

Malcolm Guite explores his integration of reason and imagination. William Lane Craig takes a philosophical perspective. Lewis’s successor as Professor of Medieval and Renaissance English, Helen Cooper, considers him as a critic. Alongside these formal, academic treatments, the collection includes more personal and conversational pieces.
Lewis’s biographer, Walter Hooper, recalls their first meeting. A panel of experts including Michael Ward and Judith Wolfe evaluates his legacy in Christian apologetics. Royal Wedding composer Paul Mealor reflects on how he set to music Lewis’s poem, ‘Love’s as warm as tears’.
Containing theology, literary criticism, poetry, memoir and much else besides, this volume reflects the breadth of Lewis’s interests and the huge variety of his own output. It is a diverse and colourful commemoration of an extraordinary figure. 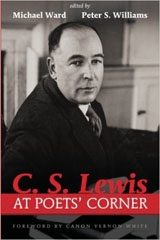