Shadows in a Photograph

Peter Waring, in early 1940, soon after the outbreak of war, Is posted as Medical Officer to an R.A.F. Bomber Station in Suffolk.

As the nation, on the brink of disaster, battles for survival, new to the job he has to learn to cope with the turmoil all around him. But Peter has his own personal conflicts, a legacy of a turbulent adolescence, of family tensions and revelations, and is now confronted by new uncertainties.
He is to have his own battles ahead. Covering mainly the period 1940 to 1941, it is the story of the men and women of the R.A.F., and of ordinary citizens, at a critical time in Britain's history. It is, too, a love story with numerous strands. And it is an exploration not only of how the past comes to influence the present and therefore the future, but also how changing circumstances affect people's attitudes and behaviour. 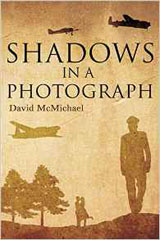