A distinctive feature of the conflict in Northern Ireland over the past forty years has been the way Catholic and Protestant paramilitaries have policed their own communities. This has mainly involved the violent punishment of petty criminals involved in joyriding and other types of antisocial behavior. Between 1973 and 2007, more than 5,000 nonmilitary shootings and assaults were attributed to paramilitaries punishing their own people.

But despite the risk of severe punishment, young petty offenders - known locally as 'hoods' - continue to offend, creating a puzzle for the rational theory of criminal deterrence. Why do hoods behave in ways that invite violent punishment?
In "The Hoods", Heather Hamill explains why this informal system of policing and punishment developed and endured and why such harsh punishments as beatings, 'kneecappings', and exile have not stopped hoods from offending. Drawing on a variety of sources, including interviews with perpetrators and victims of this violence, the book argues that the hoods' risky offending may amount to a game in which hoods gain prestige by displaying hard-to-fake signals of toughness to each other.
Violent physical punishment feeds into this signaling game, increasing the hoods' status by proving that they have committed serious offenses and can 'manfully' take punishment yet remained undeterred. A rare combination of frontline research and pioneering ideas, "The Hoods" has important implications for our fundamental understanding of crime and punishment. 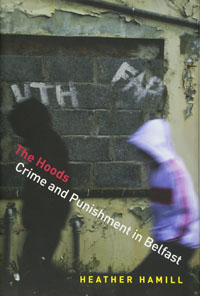