The plot twists keep coming in this novel that interweaves three stories that unfold over forty millennia uncovering a struggle that hints at the origin of our species. At the University of St Andrews on the coast of Scotland a dark force shadows Finn, a young Parapsychologist as he investigates a conspiracy of silence and confusion that is preventing him from proving the existence of telepathic phenomena. In Edinburgh a severely disfigured genius hunts the supernatural predators that destroyed his body and ripped away his true love. He struggles to retain the remaining shreds of his humanity as his obsessive quest drives him perform horrendous acts in his search for answers.

A boy grows up in a city ruled by a race of benevolent, telepathic overlords. He is destined to become his people’s youngest general in a five thousand year old war of extinction against the hereditary enemies of his city’s rulers. He starts to doubt the justice of his cause in the aftermath of his first battle. 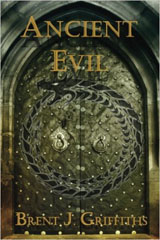