The Dragon's Blade: The Reborn King

Dragons once soared in the skies, but that was before the Transformation, before they took human form. Now, demonic forces stand to obliterate them. When left mortally wounded, Darnuir, the Prince of Dragons, can only be saved through a dangerous rebirthing spell. He is left as a babe in human hands.

Twenty years later, Darnuir is of age to wield the Dragon’s Blade. As the last member of his bloodline, he is the only one who can. He is plunged into a role he is not prepared for, to lead a people he does not know. Shadowy demons ravage his new home and the alliance between humans, dragons and fairies has fractured.
Time is short, for new threats and deadlier enemies are emerging… 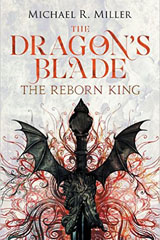