A small announcement in the evening news alerts the village to a threat of imminent fracking in its pleasant green fields. Locals band together to resist the threat of chemical pollution of rivers and waterways but, as Dorothy, their matriarch says: 'We need a water expert!' and this is where Anisha comes into the story.

Sunning herself on a beach in Aqaba and heading for Petra to study the ancient water systems of the Nabataeans, the phone call jolts her attention back to 21st century water affairs. Not everyone in the village is against fracking however and soon the locals split into two camps, while Anisha finds herself torn apart in a different way as she gets to know the ambitious young Chief Exec of the would-be drilling company.
This is number three in the Water Trilogy, of which 'Blade of Light' is the first and 'The FARIS Affair' the second. Anisha appears in all three volumes. 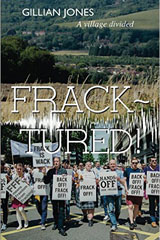