The Boys Who Wouldn't Grow Up: A Novel

St Albas University might as well be Neverland. Drunk at dawn on the first of May, the students of an elite university in Scotland prepare to run into the frigid sea in a centuries-old tradition. Among the third-year students are Catriona Darlington and Julie Lovejoy: observers to and participants in their peers’ wealthy madness.

Between two Mays, they devolve from strangers to enemies as they navigate the social rules of a generation without them and the pressures of life in a suffocatingly small cosmopolitan town. Tangled up in the chaos of the girls’ gradually intertwining lives are the boys who wouldn’t grow up: a priest-to-be; an oil sheikh-to-be; a cousin and friend who is the keeper of each girl's destructive secrets; and the immoral moral philosophy student whose years-long relationship with Catriona is taking its time in dying.
When the sun rises over the sea on May first of their fourth year, nothing and no one is the same as they were the year before. But has anyone grown up? 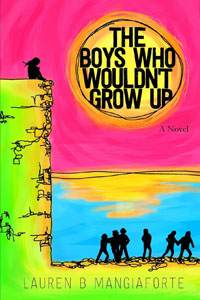