Aid and Development: A Brief Introduction

This is a concise introduction to ideas about aid and development. It is intended to be of interest to international relations academics and scholars, but also to be accessible to the general reader who would like to know more about the historical and political context of aid over the past three quarters of a century.

The first part of the book sets out the current state of the debate - in a year which has seen the world agree to a new set of universal Sustainable Development Goals - and considers where aid and development might go next at a time of great flux in global economic and political relations. The second part is a Compendium of key words and concepts mentioned in the first part of the book, and provides further background on some of the major organisations and institutions with a role in aid and development. 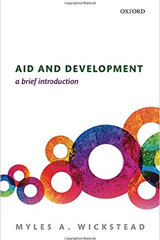