In British Malta in the early 1950s a love affair collides with protocol. The glitter of the Naval Base holds sway in the island's harbours and palazzos but behind the facades lie secrets and spies. In a society ruled by tradition, change is feared.

Philip Wayland, a young writer, is beguiled into helping rule-defying cousins Maddie and Debba Shaftoe. Betrayal follows. Torn between passion for Maddie and compassion for Debba, Wayland challenges Alick Hoyt, the naval officer he holds responsible for their downfall. Hoyt, a man who sweeps all signs of change into virtual lazzarettos, fights back.

British Malta closes ranks, unaware that in a decade Independence will come and it will vanish. 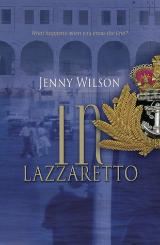