Franz Kafka's writings are characterized by an extreme sensitivity manifested in absurdity, alienation, and gallows humor. These two particular collections of short pieces, "A Country Doctor" (1919) and "A Hunger Artist" (1924), newly translated by Thor Polson, represent later works in the corpus. "Poems and Songs of Love" is a translation of the collection "Piyyutim ve-Shirei Yedidot" by Georg Mordechai Langer translated from the original Hebrew.

Published in Prague in 1929, it contains an elegy to Langer's friend and mentor Franz Kafka as well as other openly homo-romantic poems. This collaborative translation by Elana and Menachem Wolff brings the fascinating work of Langer, poems as well as an essay on Kafka, to the English-reading public for the first time and sheds light on a hitherto unexamined relationship. 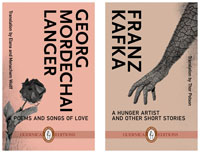