In the bitter month of January 1941 Britain stood alone against Hitler's Germany. The Battle of the Atantic was being lost as U boats scourged the convoys vital to national survival.The Blitz was at its height raining death and devastation on London and other major cities. At this crucial juncture in the war President Roosevelt sent his envoy, Harry Hopkins, to meet Prime Minister Churchill in London and find out whether Britain could survive.

Hopkins, a Presidential crony who was widely disliked in Washington, was an unlikely emissary.He was a harness maker's son from the Mid West whose radical politics had helped implement some of Roosevelt's early New Deal policies.
Churchill knew that Britain was doomed without American help and thus he had to win and woo a man who was a complete stranger to him and his government. Hopkins on his side was wary of Churchill's reputation as a spellbinding orator and knew that US public opinion was overwhelmingly against any involvement in another European war.
Sleep in Peace Tonight is based very much on the historical record of this dramatic time and tells the story of high diplomacy and low intrigue as these two very different, and differing,men overcame their differences to forge a war winning Atlantic alliance. At the heart of the novel lies a love affair in blitzed, bombed out London.Churchill had to know what reports Hopkins was sending back in coded messages to the White House.
Hopkins was given a young attractive driver, Leonora Finch, and using that relationship Churchill sought to understand how America could be brought into the war. To quote one of many fine reviews: "Sleep in Peace Tonight " is a poignant love story rich in historical detail and captivating characters caught up in the vortex of a world on the brink of destruction." Douglas W. Jacobsen, author of The Katyn Order and Night of the Flames 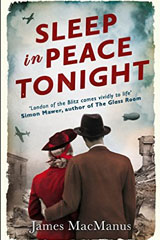