Set in a fictitious Scottish coal mining village before the onset of the Great War, Black Rigg follows the interwoven lives of the men, women and children of the local community on both sides of the social divide. Recently returned to the family estate reluctant heir David Melville must make Rashiepark pay at a difficult time for the landowners.

Socialist Alex Birse speaks out against injustice whilst self-educated blacksmith and local hero, Neil Tennant is drawn into the lives of the miners. Friends Phee Melville, Rose Matheson and Elizabeth Fraser ask what the future holds in a changing world whilst the women of the mining community bring up their children in poverty and poor living conditions.
Issues such as class, power, injustice, poverty and community are raised by the narrative in powerful style in a novel that is at once a love story, a coming of age story and a social history of an important period when the foundations of modern Scotland were being laid, as workers and women challenged the status quo and landowners, the church and the justice system resisted change.
Black Rigg (£9.99) is available from amazon.co.uk; ringwoodpublishing.com and from most good bookshops Mary Easson has a degree in Geographical Studies from the University of St Andrews, spent most of her working life in education and, in 2011, was awarded MRes Environmental History from the University of Stirling. Black Rigg is her debut novel and she is currently working on a sequel. 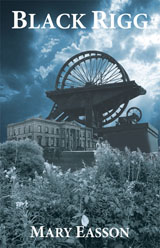