Due to an alcohol-induced navigational error, a second century Norse army arrives in Northern England instead of Gaul. The occupying Roman forces are a bit miffed and prepare to repel the invaders. But, in the nick of time, a local druid brokers an unlikely truce - subject to a few conditions which, if broken, could have catastrophic consequences for all.

The conditions of the truce remain unbroken down through the centuries until the festivities following a cricket match between the Yorkshire village of Wimpledown Manor and the Normandy village of St Claude-les-Vignes. The outgoing mayor of St Claude announces a competition to find his replacement, much to the annoyance of St Claude's arrogant wine producer Henri de la Bière, because he had his sights set on the post.
Henri promptly embarks on a quest to achieve his ambition by fair means or foul. However, it becomes clear that there is far more at stake than just the position of mayor. What is the significance of the Latin text referring to Wimpledown Manor, found by archaeologists at Hadrian’s Wall? What really happened to Henri’s Scottish father, Hamish? Who is the black knight and whose side is he really on?
Why is Henri’s wife’s psychiatrist still practising, despite being well over one hundred years of age? Will the sexually frustrated Jébut ever get his hands on Yvette or will her friendship with Alain Peluche develop into something more? And just how dangerous is Henri's pet cockerel, Percy? 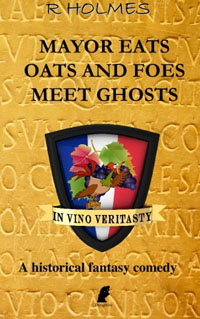