When William Burke was hanged in Edinburgh for mass murder in 1829, his accomplice, William Hare, was set free after turning king's evidence against his partner-in-crime. Fleeing from a potential lynching in the Scottish capital, Hare headed for London, where rumours spread of his death in a lime pit at the hands of an angry mob.

Thirty-four years later, a series of murders in Boston terrifies the public and thrusts the city's police force into a desperate search for the killer. When Hare is found working as a labourer on Boston's latest canal-building project, Captain Alexander Gillespie believes he has his man, the same murderer he chased through the streets of Edinburgh during his first year with the police.
But as the slayings continue, Gillespie must turn Hare lose and use the mind of one killer to catch another. From the oak-panelled studies of Massachusetts's universities to the grimy underworld of the city's docks, Gillespie and Hare must pursue a shadowy villain before he strikes again.
Against the backdrop of the American Civil War, their search leads them closer to the killer and into the heart of a desperate plot that could threaten the very future of the United States itself. 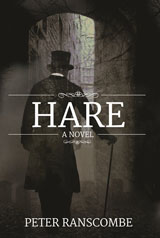