Ever wondered what being a housedad is really like? Well, the hours are long and the pay's a joke but, on the plus side, there's strong job satisfaction and an army of amusing minions. You also get to play Hungry Hippos and call it work. Mixing parenting advice and humour, Edmund Farrow tells the story of one housedad's struggle to remain chirpy in a world full of sleep-deprived women and toddlers with toilet issues.

Being a parent isn't difficult but it can be hard. Just about everyone with kids needs a little encouragement from time to time. Whether employed, at home, a mum, dad, guardian or grandparent, anyone who's ever looked after small children will find reassurance and plenty to chuckle about in Kids, Cuddles & Caffeine. Ed is a housedad, longing to spend some quality time with his Xbox. Unfortunately, life seldom seems to run that smoothly.
Besides educating Useless Dad who barely knows which way up to hold his children, Ed finds himself match-making Scary Karen, the forthright organiser of the local playgroup. Meanwhile, Ed's best friend is afraid of commitment but unexpectedly about to become a father. Ed has to keep him calm, compete with Supermum who lives next door and, somewhat reluctantly, cross swords with the neighbourhood's most terrifying granny.
Oh, and then there's the almost trivial matter of raising three children to be happy, polite, confident individuals. (Preferably without making too much mess.) How hard can it be? About the Author People meeting Edmund Farrow for the first time tend to think of him as tall, quiet and generally harmless. Then they learn he’s a housedad, has a physics degree and is a lay preacher in the Church of Scotland. One way or another, this usually makes them afraid...
Edmund has been a full-time cook, butler, cleaner, playmate and personal assistant to his three children since they were babies. When it comes time for them to choose a nursing home for him, they'd better pick a nice one or there'll be trouble. 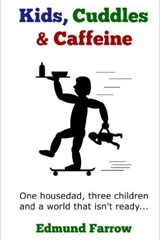