North with Franklin: The Lost Journals of James Fitzjames

Somewhere on a barren Arctic shore in the summer of 1849, knowing he was dying, a British Naval officer wrapped his journal in sailcloth and buried it beneath a lonely pile of frost-shattered stones. He was the last of the 129 doomed men of Sir John Franklin's lost Arctic expedition.

His name was James Fitzjames and for four years he had carefully recorded the expedition's achievements, hopes and, as things began to go horribly wrong, the descent into madness and eventual death of his closest friends.
This is his story. Based on original letters and diaries, North with Franklin recreates Fitzjames's journal from the Sir John Franklin's hopeful departure from Greenland in 1845 to the horrifying end four years later in the unforgiving ice of the Canadian Arctic.
We know Fitzjames kept a journal, the first sections were sent back to England from Greenland, but it was lost with the expedition. North with Franklin began as a labour of love, an attempt to resurrect a voice from a century and a half ago. It became much more and consumed several years of my life as I journeyed with Fitzjames towards his inevitable end.
"A richly re-imagined fable." The Arctic Book Review. "Meticulously researched…both entertaining and thought provoking…" Canadian Book Review Annual. "A suspenseful and enjoyable read."
Booklist Available as an eBook in all formats (Amazon, Sony, iBooks, etc) 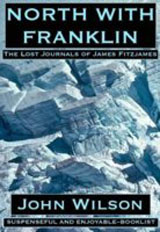