Mr. Putin: Operative in the Kremlin

Who is Vladimir Putin? Observers have described him as a "man from nowhere"—someone without a face, substance, or soul. In Mr. Putin, Russia experts Fiona Hill and Clifford Gaddy argue that Putin is in fact a man of many and complex identities. Drawing on a range of sources, including their own personal encounters, they describe six that are most essential: the Statist, the History Man, the Survivalist, the Outsider, the Free Marketeer, and the Case Officer.

Understanding Putin’s multiple dimensions is crucial for policymakers trying to decide how best to deal with Russia. Hill and Gaddy trace the identities back to formative experiences in Putin’s past, including his early life in Soviet Leningrad, his KGB training and responsibilities, his years as deputy mayor in the crime and corruptionridden city of St. Petersburg, his first role in Moscow as the “operative” brought in from the outside by liberal reformers in the Kremlin to help control Russia’s oligarchs, and his time at the helm of a resurgent Russian state.

The authors then examine the nature of the political system Putin has built, explaining it as a logical result of these six identities. Vladimir Putin has his own idealized view of himself as CEO of "Russia, Inc." But rather than leading a transparent public corporation, he runs a closed boardroom, not answerable to its stakeholders. Now that his corporation seems to be in crisis, with political protests marking Mr. Putin’s return to the presidency in 2012, will the CEO be held accountable for its failings? "For more than a dozen years—the equivalent of three American presidential terms—Vladimir Putin has presided over the largest nation on the planet, the second most powerful nuclear arsenal, and massive natural resources.

Yet there is still debate about who he really is. Fiona Hill and Clifford Gaddy have gone a long way in answering that question, starting with the title, which makes a crucial point: even though 'Mr. Putin' was, in his upbringing and early career, a prototype of the Soviet man, he’s no longer ‘Comrade Putin.’ His aim is not the restoration of communism. He has made a deal with the capitalists who have thrived in Russia over the past two decades: they support him in the exercise of his political power, and he supports them in amassing their fortunes.”—from the foreword by Strobe Talbott Praise for the book: "As experienced students of modern Russia, Fiona Hill and Clifford Gaddy are exceptionally well qualified to explain the experiences and influences which shaped the mind of Vladimir Putin, the President who came from nowhere to assert control of a vast and complex country.

Theirs is a tough analysis. Not everyone will agree with every aspect. But, if you want to begin to understand Russia today, read this book."—Sir John Scarlett, former Chief of the British Secret Intelligence Service (MI6) 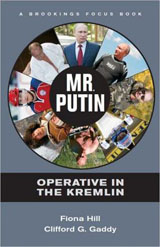