DEAD PEOPLE ON HOLIDAY represents the first fusion of visionary poetry and visionary art since William Blake. “The living”, it has been said, “are dead people on holiday”.

Stephen Jackson’s work of that title is a ten-year testimony to one man’s living extinction, concluding in acceptance and the chance of a return to hope, love, and a new life.

The poetry here pulls apart the inner sadness of encroaching age and irredeemable failure, with a candour which for most of us has to be kept stifled, silent, perhaps barely even thought. Yet this is a book which surmounts despair. If these are the ashes of a failed life, they are the ashes from which a phoenix can rise; and someday, it will.

“Visually stunning,” this work has been called: and its writing has been compared in richness to that of the English metaphysical poet John Donne. A leading British poet of today has acclaimed it as “tight and life-affirming”. What has been learnt and shared here has the power to move and perhaps empower us all.

"Only a few poets succeed in delivering first class prosaic poetry and Stephen Jackson is one of them. Allow your mind to enter his world of contradictions. Let the borders of his soul enchant you in this spiritual voyage. Go where no one went before and let his introspective poetry ravish your mind. Just sail on, sail on... upon the words and waves of a turbulent sea that is the mind of Stephen Jackson." - Lena Vanelslander, University of Ghent 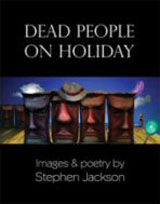