For Love and Money: The Literary Art of the Harlequin Mills & Boon Romance

Laura Vivancoâ€™s study challenges the perception that Harlequin Mills & Boon romances are merely mass-produced commodities, churned out in accordance with a strict and unchanging formula. She argues that many are well-written, skilfully crafted works, and that a few are small masterpieces.

For Love and Money demonstrates the variety that exists beneath the covers of Harlequin Mills & Boon romances. They range from paranormal romances to novels resembling chick lit, and many have addressed serious issues, including the plight of post-Second World War refugees, threats to marine mammals, and HIV/AIDS.

The genre draws inspiration from canonical texts, including Shakespearean comedies and Austenâ€™s novels, as well as from other forms of popular culture. 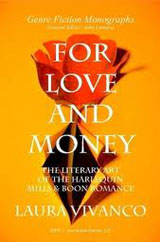