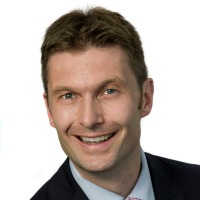 Responsibilities of the Vice-Principal (International Strategy and External Relations) include:

The current Vice-Principal (International Strategy and External Relations) and Senior Vice-Principal is Brad MacKay. He has held this role since 2017.

Brad MacKay is Professor of Strategy in the University of St Andrews School of Management. Formerly, he held a Chair in Strategic Management at the University of Edinburgh Business School, where he was also Director of Engagement on the Executive Team (2014-2016), Head of the Strategy and International Business Department (2011-2014), and Director of the MBA programs (2009-2011). He also held an ESRC (Economic and Social Research Council) Senior Fellowship in the Future of the UK and Scotland program (2013-2014). He earned a BA in International Development Studies from Dalhousie University, in Halifax, Canada, an MLitt (with Distinction) in Management, Economics and Politics (MEP) and a PhD in Strategy from the University of St Andrews, Scotland. He is also a Fellow of the Royal Society of Arts (FRSA).